Home › Articles › The Americans with Disabilities Act: Exercise your right to work

The Americans with Disabilities Act: Exercise your right to work 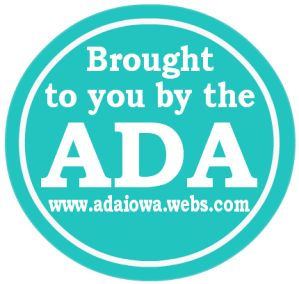 Richard Moody, 53, Parkinson’s Disease: Mr. Moody is currently a barber and has always enjoyed cutting people’s hair and providing razor-close shaves. He stated that his Parkinson’s symptoms, which include involuntary muscle spasms and trembling hands, sometimes make cutting hair difficult, especially around the neck area; however, he loves his job and is “good enough” with a straight-razor.

Lucile Hayden, 28, Narcolepsy: Ms. Hayden works as a 911 dispatcher for a local police department. Although she is very competent and able to perform her duties, her condition causes her to instantly fall asleep at random for unknown periods of time. The police chief stated, “We hate to admit it because we love Lucile, but about 70-80% of the criminals in our town can basically do whatever they want when she’s asleep. There might also be a couple murders we could have prevented had she not been asleep, but no one’s judging.”

Elen Reily, 34, Major Depressive Disorder: Ms. Reily dresses up in a fun and festive clown outfit and is known by the locals as The Funtown Clown. When Ms. Reily is not experiencing a crying episode and extreme feelings of hopelessness, she’s really great with the kids. Funtown representatives also stated that they quickly learned to keep Ms. Reily clear of any sharp objects due to suicidal/homicidal behaviors.

Daily Landry, 22, Anorexia: Ms. Landry is a food critic for a local food magazine. She loves her job and has demonstrated that she can write excellent reviews; however, her condition really interferes with her ability to actually eat the foods at various restaurants. One restaurant owner told our sources that Ms. Landry stared at her lobster bisque soup for about two hours before saying, “It looks like it has a lot of calories, I think I’ll just write an article about how pretty it is.”

Tommie Mullis, 16, Quadriplegic: You know the boy who gets the tennis balls that hit the net during matches? That’s Tommie, the local “tennis ball boy.” Without the use of his arms and legs, however, the time it takes to complete tennis matches has recently increased by 5,128%.

John Garza, 42, Chronic Alcoholic: Mr. Garza works as a local bartender and stated that he loves his job. He also stated that it does not impact his sobriety (during the interview he told our sources that he had not had a drink for 6 minutes and was optimistic that he could make it to at least 10 minutes).

Jessica Stone, 38, Deaf: Ms. Stone is a marriage counselor and stated that the best part about her job is that she “doesn’t have to listen to couples bitch and complain.” She stated that she usually just nods her head and will say a word here and there, but she really has no idea what her clients are talking about. Regardless, she has helped to repair numerous marriages and is highly regarded in her field.

Leslie Moreno, 61, Alzheimer’s Disease: Mrs. Moreno is currently employed as a waitress at a local diner. She forgot what we talking about by the end of our interview; however, she appears to be happy. The diner’s manager told our sources that Mrs. Moreno is a great woman, but that customers occasionally become confused because after delivering their food she will then revisit their table 50-60 times asking if they are ready to order. One time our cook prepared the same meal for a customer 23 times before he realized that Mrs. Moreno just kept forgetting she already put the order in.

Robin Spencer, 29, Tourette Syndrome: Ms. Spencer can type 230 words per minute with near perfect accuracy; however, her condition causes occasional verbal outbursts, which she must include in the court report because it was said while court is in session. Following is an excerpt from a recent trial which she transcribed:

Lawyer: Mr. Barnes, tell me how you know the victim.
Mr. Barnes: Well, I…
(Interrupted by voice in background): NO FUCK KITTY  PAPER AIRPLANES STUPID FUCK NO DIAPERS.
Mr. Barnes: What the fuck was that??
Judge: Please sir, no swearing in court.
(Judge interrupted by voice in background): CORN FLAKES FROSTED MOTHER FUCKING ASS DUCK.
Mr. Barnes: Seriously, where the fuck did that come from?!?!
Judge: MR. BARNES, that’s it, officer please remove Reverend Barnes from the courthouse.

Image attribution
“Flickr ADAsticker” by Brought to you by the ADA! This image was not altered.

There's an empty box below. Write in it. Cancel reply

This site uses Akismet to reduce spam. Learn how your comment data is processed.

Prefer it the old-fashioned way? Follow us via carrier pigeon!!

Delivery times vary based on wind patterns. Mail is not delivered during the aviary mating season, as the birds having lots of sex.